Note: A parish-wide history society is being established, endorsed by the Speldhurst Parish Council - The Speldhust Parish History Society (SPHS). It will cover the history of the Parish as a whole, and of the 4 component villages; Langton Green, Speldhurst, Old Groombridge and Ashurst. Office and archive facilities are kindly being made available in Ashurst Village Hall. The core Committee will contain a member of each village having a particular knowledge of their own village history. One of its key aims is to act as a repository of historical records and artifacts that might otherwise be lost with the passage of time.

Watch this space for further information as the SPHS evolves.

Some early history of Langton Green

There used to be an ancient castle just to the West of the current Broom Lane. In around 1350, Sir Thomas Holland built on its site a new home for his 12-year-old royal bride, Joanna the Fair Maid of Kent, who was the granddaughter of King Edward I.  Sir Thomas was Lord of the Manor of Speldhurst and he died in 1360, whilst on service in France.

Joanna, who had been the childhood sweetheart of Edward the Black Prince, then married him and became the first Princess of Wales. One of their children became King Richard II, King of England.

The site of the Holland’s home is believed to be where The Hollonds (built in 1835 and designed by Decimus Burton) stands today.

The following more detailed and quaintly written account has been taken from Langton Life, Issue 86, April-May 2017 written by Ed Langridge and based on an extract from The Tunbridge Wells Guide, by Sprange, 1801.

"…. Hollands is a mansion that was so called from an ancient and noble family of that name, who were great benefactors to the parish church (Speldhurst), and came to this estate, and the earldom of the county, by marriage with Joanna the Fair, the daughter of Edmund of Woodstock, Earl of Kent, and uncle to Edward the Third.

This Joanna of Kent appears to have been a woman of great beauty, and distinguished gallantry; and was the famous lady to whom it is said, we owe the first institution of the noble Order of the Garter. In the early part of her life, she was contracted to Sir Thomas Holland, but while he was engaged abroad in the wars of France, where he performed the most signal services to his King and country, she was prevailed upon to wed the young Earl of Salisbury. Soon after this, being at Werk Castle in Northumberland, she ordered her garrison to interrupt the rear of the King of Scotland’s army in his retreat from the irruption which he had made into England, which so incensed him, that he instantly turned back again and besieged her at the head of sixty thousand men. The young lady, but a little frightened at the number of his forces, several times bravely repulsed the King, when he attempted to storm the castle, and kept his whole army at bay, till he, hearing that Edward the Third was hastening to her relief, thought proper to pursue his first intention, and return as fast as possible to his own country. The seasonable retreat probably saved him and his army from destruction, as the magnanimous Edward came to the castle, in a few hours after the Scot had quitted it, where finding no enemy to encounter with, he paid a visit to the Countess, and behaved with a gallantry which has given some historians to assert, that he fell passionately in love with Joanna …..

…. When Sir Thomas returned to England he demanded his wife of the Earl of Salisbury, and upon the Earl’s refusing to resign her, presented a petition to the Pope, representing his pre-contract with the lady, and vouching that he had enjoyed her; whereupon the Pope gave sentence in his favour, and she was accordingly divorced from the Earl of Salisbury, and married Sir Thomas Holland; who afterwards built the mansion we are now writing, and became Earl of Kent, but he lived not long enough to enjoy his new honour. At his death he left one son, and a Countess a rich young widow, in which state however she continued but one year, when not withstanding her former misconduct, this celebrated lady was married to her childhood sweetheart, Edward the Black Prince.

The mansion, as was said before, has shared the fate of many other buildings and is now entirely lost."

Joanna is featured on the Langton Green village sign. 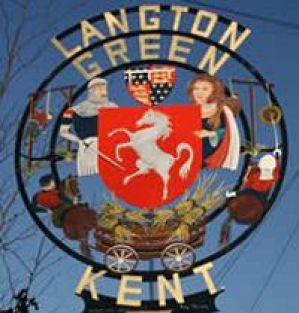 A FOOTNOTE: Local historian and author, Edward Tovey, has written a novel, The Five Hundred Year War, that although fiction is based on fact about the Holland and Waller families.

“In 1415 two Kentish families, the Wallers and the Hollands from Langton Green and Groombridge were united by the courage of their sons in triumphant battle against the French at Agincourt. 500 years later, their descendants found themselves fighting shoulder to shoulder on the Somme in France once again, this time united with the French against a new enemy in the First World War.

Available at £5 (plus post and packing, or delivery free if to a Langton Green address), please in the first instance contact the Village Society via email to  lgvs.webmaster@gmail.com   Please include your name, address and telephone number. All proceeds go to the local charity 3H (Helping Hands for Holidays). 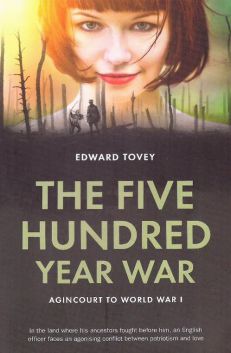 We have taken several sources to give an overview of the history of Langton Green. If you have any interesting stories regarding the history of the village, please feel free to contact us.

‘The Old Pack Horse Lane from Newhaven to London used to run straight up through the grounds of Holmewood, after having crossed the River Grom in the valley, to arrive at Gipps Cross on the crest of the ridge. When eventually the railway was built to run alongside the river, a level-crossing was made for Pack Horse Lane but in 1958, the Government decreed that most level crossings should be closed as an economy measure. As a result, the old lane, now a bridleway was diverted so as to enter Kent from Broadwater Forest. It is still a bridleway but as it emerges from the forest, it has been given a hard surface and is now called Barrow Lane (named after the family who lived at Holmewood).

These long-distance Pack-Horse Lanes were few and far between in olden times as they had to thread their way through the huge dense forest, called by the Saxons ‘Andredsweald’ and by the Romans ‘Anderida’ which covered this part of Kent and Sussex almost as far as the coast. It must have been exceptionally difficult to find a route across the High Weald because of the many deep clefts and rocky outcrops which had to be avoided. Travellers must have been grateful when passing through Langton Green for the springs of pure water that were to be found there. 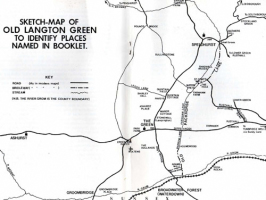 The first of these was at Adam’s Well and the second at Gipps Cross, or as it was known Gibbets Cross, because in olden times, the bodies of highwaymen or other armed robbers were hung in chains as a warning to others. The Pack-Horse Lane runs down the northern slopes on the ridge, now known as Farnham Lane which was where the second spring was located.

In 1863 a Chapel of Ease was built on the Green, on land provided by the Powells (of Baden Powell fame) and some thirty years later, local government was reorganised and power was removed from ecclesiastical parishes, where it has traditionally been, and given to new civil parishes. It was then that the villages of Ashurst, Groombridge, Langton. Rusthall and Speldhurst were all joined together to form Speldhurst Parish Council, a civil parish then under the newly-formed Tonbridge District Rural Council.

The main road running through Langton Green, along the ridge on which it grew, was the toll road from Tunbridge Wells to Maresfield. Much later, with ever changing priorities, the main road became the A264 Tunbridge Wells to East Grinstead road. Because of the importance of this road, many of the shops in Langton Green have survived, when surrounding villages have largely lost theirs.

Well into the 20th century, there were still a number of sandstone quarries in the village, from which stone had been extracted to build parts of Tunbridge Wells and most of the larger houses in the village, including the church. At the turn of the 19th/20th century, the area in Langton referred to as the Building Ground was started to be developed, and the ‘centre’ of the village moved to the area around where the shops are today, away from The Green. Just before the Second World War, a small development took place in the Dornden Drive/Monteith Close area and in the 1960’s, development within the village really took off with the population doubling in size. First, it was the area around Dornden Drive, followed by Hither Chantlers.

The Village Society, via this website, is often asked about a large property in Langton Green which was taken over by the authorities to serve as a nursing hospital and home for expectant mothers during the Second World War. 'Northfields' as it was known, was situated just off of the main Langton Road (A264) down a driveway near to where Farnham Lane starts. Please click the button lower down this page for further information on this important piece of history in many people's lives, some of whom now live overseas.

Langton Green’s main claim to fame in recent years is as the place where ‘Subbuteo’, the famous table football game, was invented and made for many years before being sold to Waddingtons. There are still very active Subbuteo Clubs around and World Championships are held. 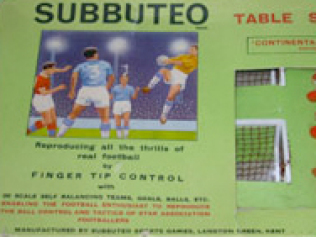 There are still many fine listed buildings in Langton – the oldest farmhouse is believed to be ‘Searles’, which used to be Lampington Farm and dates from the 15th century. ‘Stonewall’, now divided into two cottages could be even older. ‘Manor Cottage’ is Grade II* Listed and carries the red diamond as an historic building of Kent.

The following Village event programmes, guides and history books have been produced over the past some 90 years -  copies can occasionally be found in the second-hand book tent at the annual Village Society Fete 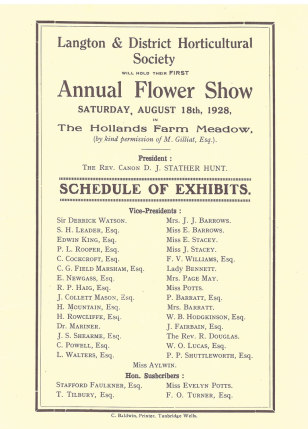 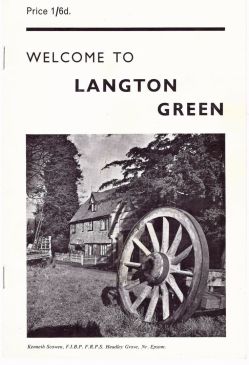 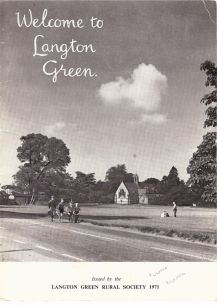 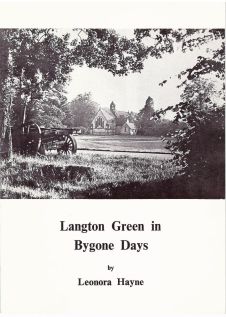 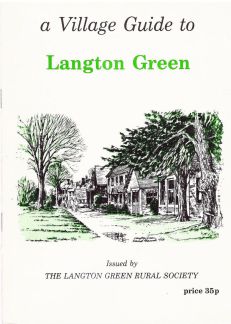 This evocative 84 page book covering the last 100 years or so of Langton Green’s past was produced to celebrate the 50th Anniversary of the Langton Green Village Society. Containing almost 150 photographs and historical information, it is the perfect keepsake or as a gift for family and friends.

Now out of print. 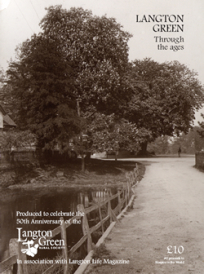 A journey around Langton Green in times past (a DVD)

This 18-minute DVD, released in 2020, is the perfect present for those who like Langton Green history. It is a compilation of old postcards and photos that have been "animated" using modern technology so that it appears as if you are driving around the village in "times past". It includes some rarely seen photos, such as the old horse-bus used prior to 1905 and the old Greyhound pub that partially burnt down and was then rebuilt in 1901.
Copies can be obtained via lawrence.dollimore@btinternet.com or edlangridge@yahoo.co.uk 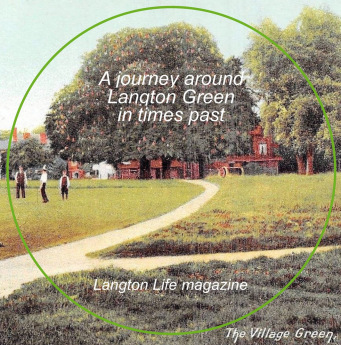 A Man of Many Parts

This booklet is about Edward Leslie Taylor (Ted), who was the owner of the Langton Green garage during the early to mid 1900s. He was a special and interesting character whose customers included David Niven and Patrick Moore. It is an enjoyable read, of historical interest.
Copies can occasionally be obtained from online suppliers such as Abebooks. 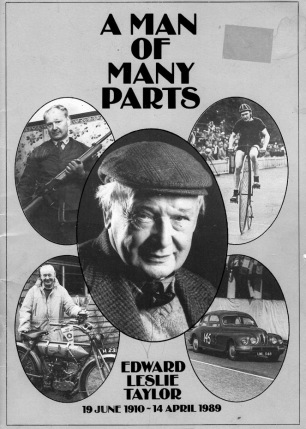